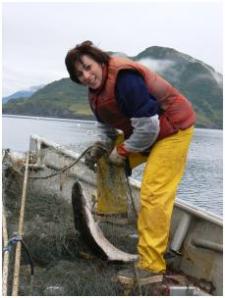 Our freezer is nearly empty. We’ve eaten all of last year’s fish and meat, which constitutes a near emergency. Tomorrow I’ll close my computer, ignore my writing deadlines and head back out by bush plane and boat to an island in the Gulf of Alaska where I’ve worked in commercial fishing with my family for 35 years.

We were so busy with the commercial season this summer we didn’t have time to put up our own fish for the winter, the wild salmon that will feed us luscious Omega-3 saturated flesh weekly through a long season of dark.

We also harvest berries, venison, halibut and sometimes caribou. Putting up our own food stores, which goes by the shorthand term “subsistence,” is a normal and necessary part of most people’s lives in rural Alaska.

“Subsistence” is defined as “The action or fact of maintaining or supporting oneself at a minimum level.” In Alaska, however, where a subsistence lifestyle is as common as wool socks, it’s evolved into almost the opposite concept. We don’t hunt and fish and grow and harvest simply to live—we engage in subsistence to live well.

We have access to cellophane-wrapped factory-farmed meat like everyone else—but it is expensive, saturated with antibiotics and hormones, and has been shipped a very long way to get here. We prefer to harvest wild-grown meat from our own piece of the land and sea. It’s one of the reasons we live here.

This last week I began another kind of subsistence:

I started re-reading Gilead, Marilynne Robinson’s wise and extraordinary novel. Her profound musings on the worth of life, as spoken through John Ames, an elderly pastor, remind me how empty my writer’s pantry has become.

The authors who have sustained me through the decades—Frederick Beuchner, Annie Dillard, Richard Wilbur, Eugene Peterson, Walter Brueggeman, Gerard Manly Hopkins, Emily Dickinson—have become strangers of late supplanted by blogs, social media, and research for other writing projects. These are all quick, short reads full of good information, but I’ve been achingly hungry without knowing it.

I realize that my writing life is little different than my food life. I’m often so busy on the commercial end of the work—the marketing, creating the next book proposal, the social media—that I forget to do the real subsistence work. While I’m as tempted as anyone else to spend my time feeding on strategies to garner audiences and master social media, ultimately, I’ll starve on such a diet.

“Fifty-seven Ways to Grow Your Platform,” while helpful, will do little to awaken mystery, stir my imagination, provoke paradox, unearth wisdom, deepen my humanness, all of which is why I began to write in the first place. I realize if I maintain a steady diet of techniques, I’ll soon be setting an impoverished table for not only myself, but also for my readers, who come themselves needing sustenance.

Subsistence work is not easy. Rather than grabbing cellophane packages of meat and fish from the meat counter, I have to go out into boats, I have to use knives and muscles, I have to cut off heads, pull out guts, spill real blood.

It’s a physical engagement with the material world. Reading the best writers is not unlike this. It takes more effort to read longer works. Blood will be spilled there as well as we wrestle with the deepest, hardest and most profound stories of dying and living. But this is how we will subsist and be sustained as writers for a very long time.

When I sit down to my first meal of grilled salmon this winter, I will remember where it came from, how it felt in my hands. I will be so well-fed, I will want to write about it, and will set the table for others to join me in the feast. I hope my work will feed others as well as I have been fed myself. With some labor, and yes, some blood, it can happen.

Leslie Leyland Fields is the author of 8 books, including The Spirit of Food, Surviving the Island of Grace, and her forthcoming book, Forgiving Our Fathers and Mothers. She lives in Kodiak, Alaska and is a national speaker and a contributing editor for Christianity Today magazine.

In her much-anthologized essay “Living Like Weasels” Annie Dillard locks eyes and brains with a weasel, launching an essay on calling. Weasels teach us how to live, Dillard writes, embodying an instinctive mindlessness, all energies pointed toward their “one necessity.” One weasel latched onto the throat of an eagle and never let go, even in death, its skeleton attached to the eagle’s chest. The essay ends here:

“I think it would be well, and proper, and obedient, and pure, to grasp your one necessity and not let it go, to dangle from it limp wherever it takes you. Then even death, where you’re going no matter how you live, cannot you part. Seize it and let it seize you up aloft even, till your eyes burn out and drop; let your musky flesh fall off in shreds, and let your very bones unhinge and scatter, loosened over fields, over fields and woods, lightly, thoughtless, from any height at all, from as high as eagles.”

It’s a stunning close to an inspiring essay. But the beauty of the language disguises the horror of the scene. The weasel latched onto the wrong bird. His actual death was not likely very poetic. As writers and as people of faith, we’re not as horrified as we might be: death is not our final fear, and we understand the larger metaphor of death. But we needn’t seek it out.

There are so many ways to die as a writer already, I’d like to save us from an unnecessary demise or two with a few simple words:  Choose the right bird. When you discover you’ve chosen wrongly, let go.

This is a simple way of saying that as writers we labor under more than one calling, more than “one necessity.” There’s the calling to write, the sense of being appointed a wrestler with words, a storyteller, even a prophet at times. But there are callings as well to particular projects and subjects. When we don’t distinguish between the two, we’ll find trouble, maybe even death.

In the last twenty years, I’ve let go of a number of essays-in-progress, articles, even book manuscripts. Despite seeking God’s direction—and feeling that I had found it, two book projects I felt very “called” to pursue, ended up withering. As each atrophied, I latched on yet harder, spending costly attention and effort trying to revive them—to no avail.

In these moments, we’re not so much rising on the wings of eagles as we are devoured by our own insecurities and disappointments. We may even stop writing altogether. This is the second death—and the least necessary. 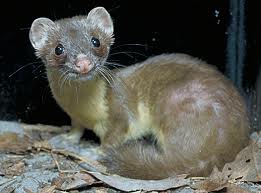 The weasel operates by instinct alone. We can do better. We can’t see into the future to know whether a project will ultimately succeed, but we can follow our given passions, testing them thoroughly with research, prayer, and rough drafts. If a project falters, as all seem to do at some point, we persevere until—-we cannot.

Then, we pry ourselves loose and let it go. Not easily, and never prematurely, but our bones will stay hinged and our musky flesh will live to choose another subject, another day, one that may indeed send us soaring.

Leslie Leyland Fields is the author of eight books, including The Spirit of Food, Surviving the Island of Grace, and her forthcoming book, Forgiving Our Fathers and Mothers. She lives in Kodiak, Alaska and is a national speaker and a contributing editor for Christianity Today magazine.